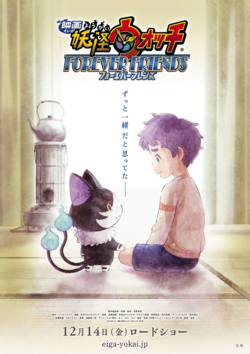 Yo-kai Watch: Forever Friends ( Japanese : 映画 妖怪ウォッチ FOREVER FRIENDS, Eiga Yōkai Wotchi Fōebā Furenzu) is the fifth theatrical film in the Yo-kai Watch franchise. It is set to be released on December 14, 2018, in Japan. The movie is produced by OLM, Inc. and distributed by Toho with Akihiro Hino being the executive producer and screenwriter as well in charge of the original concept.

"Sakura Motomachi, Tokyo in the 1960s.
Shin, a boy who lived happily, despite being poor, loses his mother, his only family member, and falls into deep misfortune.
Itsuki, a boy who saves Shin. He also lost his older sister.
Those two boys are joined by Tae, a girl who can see Yo-kai, and together with Shin's guardian spirit Sū-san, and new Yo-kai such as Nekomata, they take on a mysterious incident in order to retrieve the souls of their precious family!
And what is the shocking truth that awaits them...!?
This is a story about the friendship formed between three children and Yo-kai―"

Information about the film was released in the June 2018 issue of CoroCoro Comics. They revealed the title and the release date of the film as well revealing that Level-5 founder Akihiro Hino is credited as executive producer and screenwriter, and is also in charge of the original concept. After the announcement of the film, an official website has released for the public. The story of the film has een revealed as well, revealing that the story takes placein 1960s Tokyo, in Sakura Motomachi. A boy named Shin lives a poor but happy life. When his mother — his only family member — dies, Shin's unhappiness hits rock bottom. That is when another boy named Itsuki saves Shin. Itsuki has also lost his older sister. Shin, Itsuki, and a young girl named Tae who can see yo-kai all become friends. Shin's guardian spirit Suu-san, a "Nekomata" cat, and other new yo-kai join their group, and this group is able to regain what it means to have a precious family. This new family must now face a mysterious incident, and a shocking reality awaits them.

Tickets for the movie will be available for purchase in advance on July 13, 2018.

The first trailer for Yo-kai Watch: Forever Friends was released on June 21, 2018 and features Nathan, Nathaniel, Hovernyan and Whisper from the original series. The trailer also revealed that there is no usage of Yo-kai Medals as the protagonist Shin uses the Yo-kai Ark.

Retrieved from "https://yokaiwatch.miraheze.org/w/index.php?title=M05&oldid=1655"
Category:
Cookies help us deliver our services. By using our services, you agree to our use of cookies.