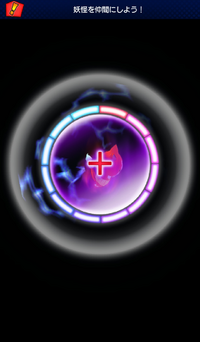 Gameplay of Yo-kai Watch World which the player finds the Yo-kai through the lens.

Yo-kai Watch World heavily borrows the concept of Nintendo, The Pokémon Company, Game Freak and Niantic's popular application Pokémon GO. The real-life player plays the role as the protagonist as they search for many unique Yo-kai that appear in the real world. The player can battle against the Yo-kai that are making an appearance in Japan and the goal of the game is to complete the Yo-kai Encyclopedia by moving in Japan or passing other players in Japan. The player searches for nearby Yo-kai on the location that they are on the map, as there are various Yo-kai to discover depending on the player's location as they should not forget to search for nearby Yo-kai if they are visiting a new place. The player should tap the iconof the Yo-kai they have found through "search" and by doing so, the player will be able to see Yo-kai through their smartphone screen. The player has to find the Yo-kai and pursue them so that they do not escape. The game takes elements from the mainline Yo-kai Watch series, as the search system represents on how the player finds the Yo-kai through the lens of the player's Yo-kai Watch and have to pursue them without letting them escape.

The battle system of the game is similar to the main Yo-kai Watch games, as when the player search for Yo-kai a battle will begin. The battles are semi-automatic which the Yo-kai can use special moves when the player has an opening or in a pinch. The player also can help them with switching places of the Yo-kai from left to right, or from the mid to left or right or from left to mid and right to mid. If the player manages to defeat the Yo-kai in battle, they are able to befriend them afterwards. By training the Yo-kai the player befriends, they can fight against powerful Yo-kai. If all six of the player's Yo-kai has been defeated, the player loses the Yo-kai they've found. The player can also possess nearby players, a possessor Yo-kai can travel with the player it possesses to new areas and they might bring back a Yo-kai from somewhere the player could not get on their own or sometimes bring back souvernirs. The exact location of the player will not be shown to nearby players.

The player can plant trees at their current location, as well as at places a possessor Yo-kai visits. Yo-kai gather around the trees creating the oppurtunity for new encounters. The player should make proper use of Yo-kai Trees to increase the number of places they can befriend new Yo-kai.

One June 12, 2018, Level-5 revealed that they are hosting a special event in Japan on June 27 which they are expecting to announce a brand-new Yo-kai Watch game for the franchise's fifth anniversary. They've also revealed that the event is not about Yo-kai Watch 4, and stated that it will be a "super big title that will shock the world".[2] On June 14, 2018, Level-5 released a teaser that the game will be a smartphone application were both Jibanyan and Komasan are holding a smarphone in their hands. Looking further on the visual, it gave away that the game would be in the same fashion as Pokémon Go.

Retrieved from "https://yokaiwatch.miraheze.org/w/index.php?title=Yo-kai_Watch_World&oldid=1736"
Category:
Cookies help us deliver our services. By using our services, you agree to our use of cookies.